Erasing the Stigma of Girly Drinks

When’s the last time you saw a big, burly man order a cosmopolitan or a sex on the beach? Probably not recently, right? Or maybe not ever. Because remember don’t drink girly drinks. 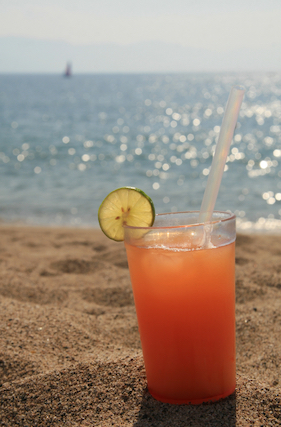 Every time I hear the word “girly,” I cringe. Not because I hate what’s considered “girly,” but because there exists an adjective specifically used to define what women—and definitely not men—are supposed to like.

Unfortunately, gendering inanimate objects is a large part of our dichotomy-obsessed society. Such pervasive stereotypes insidiously affect people’s social behavior, including, in this case, what men drink at a bar.

Over time, less-boozy drinks have come to be nicknamed “girly” in order to distinguish serious macho drinkers (men) from us delicate-palate types (women).

But what on the earth makes a drink feminine? Is it the name? The color? The taste?

For the most part it’s all of that, combined with peer pressure and the fear of emasculation. To help you visualize it a little better: A regular show of masculinity at a bar equates to quaffing a lot of plain, bitter-tasting, hard alcohol. Yuck.

According to this, then, masculinity means parading a set of super resilient taste buds.

But since when do tongues have anything to do with gender? And why is it men are not allowed to enjoy sweet flavors? If you apply this bizarre logic of “sweet = feminine” to food, men are thus “too masculine” to eat anything with similarly saccharine flavors. Why eat ice cream or parfaits, after all, when you can chow down on cement, mud or tree branches, am I right?

There’s only one word for this rigid social code: stupid.

If you’re a man out partying with your male friends—and not just any acquaintances but real, true, honest-to-god friends—why should they dictate what you order at a bar? Do they do the same when you get a bite to eat or go out to a movie or choose your outfit for the day?

I’m pretty sure the answer is no. (If not, get to a psychiatrist fast.)

So let’s end this lame trajectory of what men are supposed to do at a bar. You’re allowed to guzzle something that actually tastes good and not worry about appearing fragile. It’s not like you’re the Wicked Witch of the West capable of liquefying at the mere touch of a slightly watered-down drink.

Now’s the time to flex your esophagus. If you’re a brave man ready to go against the grain, try any one of these five deliciously “girly” drinks and you’ll be sure to start a killer conversation—at the very least, on gender.

Look at it as a healthier alternative. “An apple a day keeps the doctor away,” right?

If it’s anything like the infamous women’s magazine, this drink is sure to spice up your, er, naughty life.

Sex on the Beach

It literally has the word “sex” in it. And all guys like sex.

It’s exotic and cool-sounding. Imagine you’re on the beach, avoiding all pressures of masculinity, and sip away.

C’mon, everyone likes smoothies, and this one actually has alcohol in it!

Remember, it’s not like drinking a “girly” drink will suddenly alter your anatomy or chromosomal pattern. I promise you’ll walk out of the bar the same man you were when you walked in—with just slightly sweeter-smelling breath. And who wouldn’t want to kiss that?