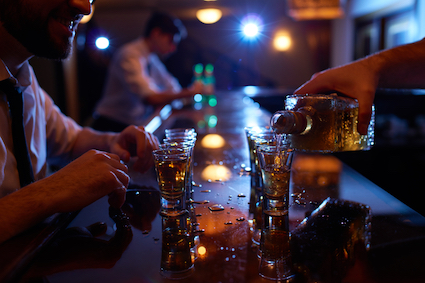 If you’re a bartender, you’ve seen it all: the drunks, the fighters, the pukers, the bubbly late-night bar crawlers. Part of you loves your eclectic customers, and the other part of you really wishes you could kick a few of these people out, given the opportunity.

Or, rather, given the right.

Figuring out when it’s totally okay and totally not okay to refuse service to a customer or force one to leave a bar is a gray area for a lot of bartenders. And it’s not your fault—the laws governing bars and pubs differ by state and establishment.

You should never find yourself questioning your decisions, especially when it comes to the safety of your coworkers, your customers and yourself. These rules might be confusing and overwhelming, but they’re your rights—and, yes, you have a right to know them.

When is it legal to exercise your rights?

In the United States, bartenders (i.e. establishments) have the right to evict disorderly persons from public premises. But sometimes you’ll be faced with evicting less belligerent and less conspicuous types of people for other reasons equally justifiable.

While specifics vary by state law, here are a few circumstances in which you are (almost always) allowed to ask customers to leave:

And when it comes to the fun part of your job (e.g. making alcohol taste good), bartenders can legally refuse to serve alcoholic beverages to the following types of customers:

Now that we know the basics, it’s time to delve into the specifics. What’s the easiest way to figure out your rights as a bartender?

The simplest methods are to check your handbook and ask your superior, but neither of these resources gives you the breadth of legal information expounded in your state’s statutes—which are surprisingly pretty easy to find. All you have to do is hop online and visit your state’s legislative website by searching for YOUR STATE + LAWS. (Hint: You’ll know the site is legitimate if it ends with .gov versus .com or .org.)

Once you land the correct site, search for laws regarding public accommodations, establishments, disorderly persons or eviction.

For example, according to Texas statutes, the term “disorderly conduct” applies to any of the following situations and people:

While the above examples are perfectly legal circumstances to ask customers to leave, be aware of your choices and the overall atmosphere when exercising this particular right. The last thing you want to do is ask someone to leave due to a perceived personal prejudice. In other words, don’t be a sexist, a racist or a homophobic jerk—and definitely don’t seem like you’re one, even if you’re not.

For the most part, anti-discrimination laws sound a lot like this one taken from a Florida statute: “All persons are entitled to the full and equal enjoyment of the goods, services, facilities, privileges, advantages, and accommodations of any place of public accommodation without discrimination or segregation on the ground of race, color, national origin, sex, pregnancy, handicap, familial status, or religion.”

Sometimes, though, these laws can be hazy. Such is the case with a pregnant woman who was asked to leave a bar back in 2011 simply because of the fact she was pregnant. No, she wasn’t drinking alcohol—just water. So was kicking her out an appropriate response, or was it downright discriminatory?

That’s where the infamous gray area comes into play again. As a bartender, you have to make judgments about certain situations, but you can’t just assume a customer is a liability without law, a handbook or common sense backing you up.

So study up, research and know your rights. You’ll be thankful you do when that one potentially problematic customer comes strutting in.