Why is it so hard saving when your entire income is cash? You’d think it would be easier when you can physically see all your hard earned dough disappearing. And yet, it’s infinitely harder to save when you’re taking home your salary every night instead of twice a month. 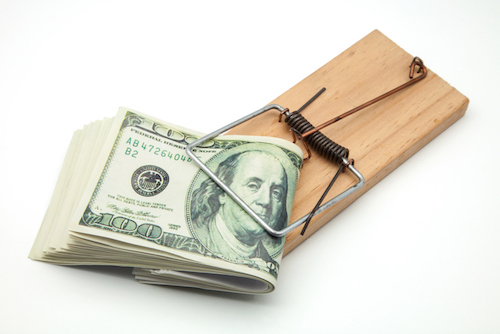 We get it, that’s why we’ve rounded up some tricks we think will help you keep some of that green.

First things first, you can never save if you don’t actually put your money, or most of it, in the damn bank!  It’s very hard to keep track of what you’re accumulating week to week when there’s a constant two-way flow of cash out of your wallet.

So, we recommend designating one day a week to count up and deposit all of your money.  My “week” ends on a Tuesday.  So every Tuesday I go down to the office and count up everything I’ve made that week.  Then I go right to the ATM and deposit it!  By doing this consistently, you’ll actually know how much you’re making for once.  The first step to saving really is keeping track!

You may have heard your mom tell you this before, but it really works.  Choose one bill every month, like a credit card payment.  Then, every time you pay that bill, transfer the same amount as that payment into your savings account.  After a while, this starts to add up.  This method is also a good way to save for something specific, like a vacation. It’s relatively painless since you’re already doling out some cash, so why not feed your own piggy bank at the same time?

Be Realistic and Relax

When I started my current job I decided to put $100 a week into savings.  I wanted to see the numbers climb quickly, but it just wasn’t doable.  So, I bumped it down to $75, giving me an extra $200 as a cushion for the month.  And, if on the last day I still had that money, I put it into savings.  What we mean by relax is, don’t put too much pressure on yourself.  The most important thing is that you save consistently.  It will start to accumulate; you just have to give it time.

Buy That Coffee, But Save At the Same Time

Sometimes it’s life’s little luxuries that get you through the day.  If you look forward to that double mocha frappe every afternoon, and if you can truly afford it, get it!  Then, transfer the same amount that coffee cost you into savings.  Or, put $3 into a separate part of your wallet or an envelope and watch the money pile up.  It may not seem like a lot, but at the end of the year, you could find yourself with upwards of $1000 in extra savings!

Change Your Mindset Around Money and Saving

Whenever I spend money on something frivolous, like a taxi home because I’m feeling lazy, I try to think of that expense in different terms. For instance, you may not think twice about spending that $20 on a cab three times a week, but you wouldn’t go to H&M and buy twelve new T-shirts a month would you?  While the goal isn’t to shame yourself, sometimes we all need a bit of perspective.

Be Consistent about Saving

We know that this can be nearly impossible when you depend on tips, but it can be done. You may have to set a slightly lower number than you originally would have liked to, in order to account for slow weeks, but if you save the same amount every week, or even every month, you’ll be on your way to building a solid little nest egg.  Knowing you’re secure is truly the best feeling.