An apple a day keeps the doctor away, but what about an appletini? Is there a correlation with health benefits and drinking alcohol? 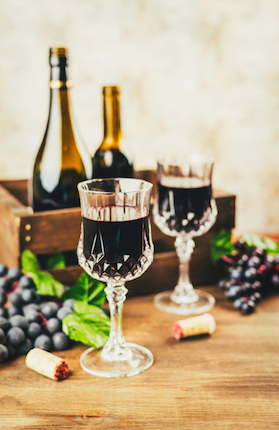 People love to debate. And alcohol’s so-called “health benefits” have been under scrutiny for years. I’m sure you’ve heard or even voiced some of these common refrains: Is red wine really good for you? How often is too often? Can alcohol help you lose weight? Ryan threw up on me again. (OK, maybe not that last one.)

Some of these questions are difficult, if not impossible, to answer. But let’s give this a shot. If we’re trying to determine the health benefits of alcohol, we need to start by looking at whether “healthy” drinks exist, as well as whether drinking in moderation is medically advisable.

“Healthy” is a highly subjective term. With drinks, as well as with food and non-alcoholic beverages, the term “healthy” is usually used to refer to one of two things: 1) few calories, or 2) high nutritional content.

Let’s look at calories, first. Naturally, calorie counts vary dramatically among alcoholic beverages. To give you an example, a Miller Light averages 96 calories per 12 ounces, while a martini averages 295 calories per 4 ounces. That’s a huge difference, folks.

As a result, people trying to lose a couple of pounds typically prefer straight alcohol or simpler combinations over cocktails. The biggest problem with this, though, is that low-calorie drinks on a whole aren’t particularly flavorful and have very little nutritional value. Take a vodka soda, for instance; the drink averages 96 calories per 1.5 ounces but offers little taste and even less enjoyment. Is it healthy? Not exactly.

Which brings me to my next point: Are there any drinks with high nutritional content?

At this point, I assume you’re probably thinking, “Well, what about red wine? It’s made from grapes, so surely it has some health benefits, eh?” The truth is that the health benefits of red wine are contentious. Despite numerous studies claiming wine can be used as a preventative measure against heart disease and other ailments, none of these reports have been conclusively proven. The American Heart Association agrees: “The linkage reported in many of these studies may be due to other lifestyle factors rather than alcohol.” Great—another dead end.

The second concern, then, is whether it is healthy to drink or begin drinking alcohol at all.

Let’s get something straight: Nobody needs to drink alcohol. Alcohol isn’t on the food pyramid, squeezed in-between vegetables and meats and rice. That being said, it isn’t the worst thing to consume, either. In its chapter on alcohol consumption, the Dietary Guidelines for Americans states, “If alcohol is consumed, it should be in moderation—up to one drink per day for women and up to two drinks per day for men.”

So, moderation is key, right?

Well, not exactly. The guidelines go on to say, “The Dietary Guidelines does not recommend that individuals who do not drink alcohol start drinking for any reason.”

Most sources, it seems, echo the somewhat contradictory opinion that while alcohol should essentially be avoided, moderate drinking isn’t likely to result in any long-term health consequences.

When it comes down to it, what and how often you drink is completely up to you. Alcohol, though perhaps not the healthiest drink in the world, isn’t going to hurt you in the long run, but it certainly isn’t going to guarantee a longer lifespan, either.

Still, nobody can predict the future. Maybe you’ll turn out to be the next Antonio Docampo Garcia and live to be 107 by chugging four bottles of wine a day.