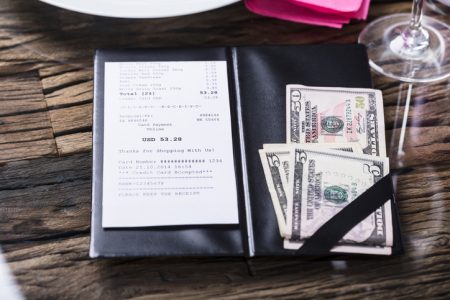 Millennials are the driving force behind avocado toast and poke bowls. But don’t count on the younger generation to throw in a few extra bucks to the servers delivering those culinary innovations.

Young adults age 18-37 are much less keen on tipping than their older counterparts. According to a new survey by CreditCards.com, it shows that millennials’ attitudes and behavior on tipping tend to be stingier across the board.

Ten percent of Americans ages 18 to 37 say they routinely leave no tip. Nearly one in three leaves less than a 15 percent tip at restaurants. Older adults tip more.

Whether it’s a food truck, coffee shop or after taking an Uber, about one in six millennials say they regularly choose the lowest option. And nearly one in five gives no tip – the highest figures of any age group.

Philosophically, young adults are the most likely to say they would prefer to do away with tips and have the service charge included in restaurant food prices. About 27 percent of millennials say they favor that option to the existing system.

What’s behind the shift in tipping trends seen in millennials?

“Tipping at sit-down restaurants has always been the standard in the U.S., but that’s not necessarily the case in other countries,” says CreditCards.com senior industry analyst Matt Schulz. “We’re seeing younger adults tipping less, and even showing a greater preference toward eliminating tipping altogether, even if it means paying more on the bill.”

That data might make it seem as though millennials are just cheap, but a more nuanced explanation is that people with more money tend to tip more. And young adults as a whole have lower incomes than people who are further along in their careers.

Lynn says it is difficult to know if tipping in general is becoming more widespread or less common.

Some industries, such as cruise lines, have largely done away with tipping and include service charges in passengers’ bills. But in other areas, such as order-at-the-counter restaurants and with ride-sharing vehicles, tipping is seemingly becoming more widespread. Those who use rewards credit cards to earn points on dining and travel expenses might not mind adding on the recommended tip to their bill. But not everyone believes the current system is fair to employees.

Tipping, Lynn says, is a way of allowing customers to have more control over the experience and to motivate employees to provide good service. It is not a perfect system, and it has been criticized as discriminatory, since studies have shown that young, attractive waitresses earn more in tips.

Would you pay more if there was no tipping?

Tips remain an important component of income in those fields in which it is common. And customers seem to prefer the practice to alternatives such as mandatory charges or higher costs.

“There are people who want to pay waiters more, but when you say you’re going to pay for it out of higher menu prices, they are not so thrilled,” Lynn says.

Overall, just 21 percent favored higher food prices and no tipping. Some restaurants have taken that approach, but others have ended no-tipping experiments after losing customers.

The Emily Post Institute, which provides etiquette training, says tipping “is one of the most stressful and confusing aspects of etiquette today.” It recommends tipping 15 to 20 percent on the pre-tax total at sit-down restaurants.

The Emily Post Institute also lists 17 other circumstances when tipping is appropriate, including leaving money for hotel housekeepers and giving a few dollars to valets and restroom attendants.

“Tipping can be tricky and awkward because there’s really no right or wrong answer,” Schulz says. “However, the truth is that many workers rely on tips to generate a large portion of their income. To them, it’s not just about etiquette. It’s about being able to provide for their families and put food on their own tables.”

“WHEN YOU ARE A WAITER, YOU LEARN THAT YOU NEVER KNOW WHEN YOU ARE GOING TO GET A GOOD TIP OR A BAD TIP.”

Nearly 55 percent of seniors age 65 and up said they tip 20 percent or more at restaurants, the highest of any age groups. Just 35 percent of people under 30 reported tipping at that level.

The median tip from women is 20 percent, compared with just 16 percent from men.

Just 13 percent of whites said they typically tip less than 15 percent, compared with 48 percent of blacks and 36 percent of Hispanics.

Diners in the South and West tend to tip less, and Southern customers are most likely of all (7 percent) to stiff servers and wait staff.

And those with higher incomes and college degrees are bigger tippers.

Those trends are just averages, of course. People who work in restaurants often can’t predict how they will be tipped until the diner pays the bill.

“When you are a waiter, you learn that you never know when you are going to get a good tip or a bad tip,” says Steve Dublanica, a former waiter and author of “Keep the Change: A Clueless Tipper’s Quest to Become the Guru of the Gratuity.”

Dublanica says you can insult a patron and still receive a nice tip, or you can provide great service and receive nothing.

This tipping study was conducted for CreditCards.com by GfK Custom Research North America on its OmniWeb online omnibus. The sample consists of 1,000 completed interviews, weighted to ensure accurate and reliable representation of the total population, 18 years and older and was conducted May 18-20, 2018. The margin of error for total respondents is plus or minus 3 percentage points.